PharmHack, Hackathons and the Future of Prosperity

Every conversation, article and blog post about disruption or innovation carries with it a subtext. And that subtext is loaded with fear. Suspicion. Trepidation. All of us – from entrepreneurs and innovators, artists, creatives, small business owners to “captains of industry” have heard the rhetoric of the #IdeasBoom but remain sceptical of its real world impact. We wonder, from the comfort of our cocoons of full employment and “jobs for life”, whether this innovative future is all that it’s cracked up to be. Can the politicians, startup entrepreneurs and futurists be believed? Will this next generation deliver the future that we need or will the opportunity be squandered and need rescuing?

In 2015, the Committee for Economic Development of Australia (CEDA), released a report focused on the future of Australia’s workforce. This report indicated that more than 5 million people – 40% of Australia’s workforce – could be replaced by automation within the next 10-20 years. This sounds alarmist. But think about it – averaging out the job losses, this means that up to 500,000 people could lose their livelihoods every year for the next 10 years. That means half a million families looking to government support. Massive impacts on the economic AND social fabric of the country. It also means less disposable income for consumption. Education. Investment. Growth. It means more government spending. It means contraction over growth.

But if Einstein’s dazzling intellect taught us anything, it was this – the definition of insanity is doing the same thing over and over again and expecting different results.

So while the current focus on startups, entrepreneurial activity and innovation “sounds” like rhetoric, it provides a welcome respite from the business as usual platitudes of the sceptical, the comfortably numb and the economically ambivalent members of our society who have the perceived luxury of economic security or career tenure. Nothing changes, they say. Innovation is a buzzword, they say. Get a job. A better job. And put your head down, they say.

In response, echoing the words of General George Patton, startup entrepreneurs issue their clarion cry, “lead, follow or get out of the way”. It seems we have a small but growing tidal wave of disruption meeting a great sea of inertia. But is has always been this way.

Over the last couple of years, companies and governments have begun experimenting with hackathons. They are a cost-effective way to reduce the risk of innovation and can yield surprising and unexpected benefits from new product development to accelerated procurement, talent sourcing and brand impact. Yet the power of hackathons and strategic innovation programs to deliver business benefit has remained largely untapped – particularly in industries that have been resistant to change, slow to react to the changing digital landscape or bound by legislation or regulation.

Much of our recent work has been in that space. Healthcare and pharmaceuticals. Aviation. Government. Professional services. While large organisations operate on a scale that can be challenging, they also have the opportunity to scale innovation in a way that smaller companies and startups can only dream of. But seeing is believing. And that means purposefully designing programs that deliver long term value but also short term wins.

PharmHack and the opportunity to innovate in pharmacy

Collaborating with digital pharmacy consultancy, HealthClick , we recently delivered the world’s first pharmacy hackathon – PharmHack. The express purpose of of the event was to bridge the gap between digital innovation and the pharmacy industry. Over 36 hours, pharmacists, healthcare professionals, developers, designers and entrepreneurs dedicated their weekend to the promise of the Australian Government’s IdeasBoom principles.

But PharmHack was no glossy TV commercial.

The reality of innovation is much scrappier, more intense and far more personal than the government’s advertising and media coverage would suggest. A hackathon involves a cast of ill-fitting collaborators finding a way to work towards an uncertain future. It’s hard, tiring and confronting work without a brand, a budget or a buyer in sight. It means coming up with an idea and seeing it through. It means pitching it to a room full of strangers. It means putting your money where your mouth is.

Luckily, with the generous support of Fishburners, Australia’s largest startup space, the PharmHack participants had plenty of space to spread out, creative spaces to rest and recuperate, and stairwells to use for pitch practice.

PharmHack kicked off with a rundown of the weekend’s process and a call out for project leaders. We had already asked registered participants to share their ideas and challenges – but it’s one thing to write a few words on a Facebook page, and quite another to stand in front of a crowd of strangers and share your vision for a new business.

We started by having the projects written up on an Ideas Board. It was 10 words or less and the project leader’s name. Then each person had 60 seconds to pitch their idea to the crowd in an effort to attract the best and  brightest talent in the room.

From the dozen or so ideas pitched, 10 teams were formed. In almost every case, these people had never met before. From these ideas, new projects – and perhaps even new businesses – were hatched over the course of the weekend. Seeing the difference in the way an idea was pitched on Friday night and the way that same idea was discussed, validated, defended and championed by Sunday afternoon can be transformative. Understanding the focus, mentoring, personal growth and effort required in that time – all without a guarantee of benefit, payment, reward or recognition – is astounding. In fact, it’s hard to believe if you have not experienced it. As they say, seeing is believing.

The first day of a hackathon is an emotional rollercoaster. One of the PharmHack participants, Sophia Avery, explained that while she was prepared for the intellectual challenges, she had not expected the emotional and personal growth challenges that came with the innovation territory.

I am out of my comfort zone @pharmhack. Lots of learning – to relinquish control, seek/receive feedback, & trust the process #personalgrowth

Not only had participants come through the first phase of excitement and energy of team forming, they had quickly moved through that phase to realise the vast challenges in front of them:

One of the best team pitches from Friday night was Ken Cheng’s “Scripts Now” platform – a solution that promised to connect consumers with pharmacies who could fulfil their orders immediately. Ken delivered a powerful and persuasive pitch, attracted a great team, but was floundering half way through the first day. By the time we saw his 60 second pitch at the end of day 1, the proposition was weaker than it was on the first night, the technology was non-existent, and the business model barely a blip on the radar. On Sunday morning when I spoke with Ken, it was clear the journey ahead was long, but there was only about 6 hours to make it.

But the resilience of hackathon teams, the focused mentoring and the time constraints can yield amazing results. That Ken and his team emerged at the end of the weekend with second prize is a testament to the team’s tenacity, the mentor support and input, and unique hothouse environments created by hackathons.

It also shows just how much CAN be achieved with 24-36 hours.

Day 2 – tougher love, storytelling and the brutality of truth

The final day of a hackathon is filled with nervous excitement. Teams often work through the night, taking nanna naps under their desks in-between tech sprints, finding their way back to the event space just in time for pitch practice. Everyone is tired. Emotional. Pushing the limit. And that’s before coffee.

Pitch practice is vital for each of the teams, and we kicked this off first-thing. In a format where you have only three minutes to tell your story, brevity and laser like focus is essential. We hit the countdown timer and the teams took to the stage. Some scraped through with seconds to spare. Some were pulled up as the time expired. Then it was over to the pitch coaches to help knock the stories into shape.

Imteaz Ahamed, Laura Rojas, Benjamin Darbyshire, Naveen Krishnasamy and I each took turns providing feedback and direction. We followed up later with teams to check on any questions or changes they had made and to ensure they were ready to deliver their best. After all, while hackathons are competitive, we are also building capacity – providing vital experience and working to build better entrepreneurs, startups and businesses.

At lunchtime, the space was transformed, with the teams working in the Ideas Space downstairs, frantically testing apps, learning lines and practicing their pitch timings. Observers and audience members from across the Pharmacy and healthcare sector arrived, quickly filling the room and the available seats. A group of teens from PLC sat excitedly on the floor at the back of the room, soaking up the energy. They had provided feedback to one of the teams – Little Pink Book – on Saturday and were secretly hoping that Sahar and Jassmin would win.

The teams and projects pitched were:

The judging team – Claire Pallot from Sigma Pharmaceuticals, Guy McKenzie from PharmaData, Josh Swinnerton from MedAdvisor and Greg Stevens from Consult8 – watched the pitches, asked questions and disappeared to deliberate. And after a short deliberation, they returned with their verdict.

The winner – taking home $1500 in cash, $5000 worth of legal advice from Swaab and mentoring and coaching from Mobile Republic and tickets to the Meditech Conference – was CheckedUp. Their working prototype, powerful business case and pitch won the judges over. ScriptNow impressed the judges, garnering second prize, with TravelBug coming in third.

Taking MVPs to the next level

During the course of the weekend, the focus is on developing – or at least articulating – a minimum viable product (MVPs). And PharmHack saw at least half of the projects using working code. But where to from here?

We’ll be following up with the teams to help them take their MVPs to the next level. By my estimation, half of the projects pitched could very quickly brought to a commercially viable level with a small amount of funding and some incubation. And judging by the interest of well-connected industry representatives in the room, this won’t be the last we hear of these newly minted entrepreneurs.

If Australia is serious about backing entrepreneurship, hackathon events, structured and focused incubation and pathways to market need greater support. Not just from corporates and industry, but from government and government agencies as well as consumers. We need to get better at “buying innovation”, not just observing it from a distance. It’s not just about entrepreneurs and ideas, it’s about the prosperity of our nation. 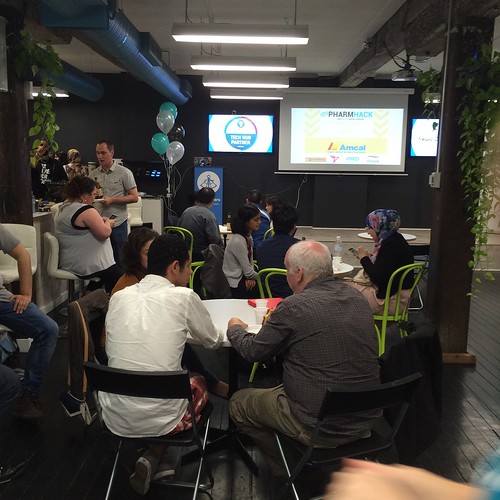